Alright lads, this is a Blast From The Past review.

Like a peversely difficult monster with multiple tentacles, Getsumen To Heiki Mina was proving be a potentially tedious series to finish, based on its first few episodes. Luckily I was proved wrong, here's the full review below... 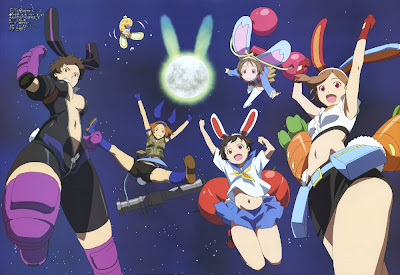 Image source - Moggling.com
Let's get this straight. If it wasn't for Densha Otoko which was released in 2005, I wouldn't have touched this magical girl anime with a ten-foot pole. Miina first appeared there as an obsession of the main otaku character, and a couple years later Gonzo come out with an original series.

Basically... Rabbit aliens are infatuated with Earth's sports and frequently infiltrate and disrupt events on a massive scale. Luckily there's a squadron of rabbit-eared Miinas from the Rabbit Force ready to capture these pesky aliens.

At first, there's little to expect from this anime. Tsukuda Mina, a generic girl trying to juggle her school life, anchoring job as well as being a superpowered girl. I wonder if anyone else might squawk in disbelief at how the Miinas weapon units are blasted from the moon (in revolver style!), and then flew across the Pacific ocean just to stick it up on her bum. Suspense of disbelief. You must has it. Or you will die.

Transformation scenes are a staple for magical girl animes, but it gets too long for Tsukishiro Miina's. Ootsuki Miina's was pretty much eye-popping but the rest was kinda sloppily done.

Ridiculous, ridiculous, ridiculous. That's me saying how ridiculous it is until later on it gets pretty good. More Miinas were brought into the story, and surprisingly, half a dozen new Miinas pop out in the finale episode. There's also a schadenfreude-loving Mutsumune who ironically evokes the viewer's schadenfreude when she gets bashed up by random objects in almost every single episode. There's also a lot of eye candy whenever any of the Miinas appear. Ootsuki Miina gets my personal seal of approval. :D

Like an Matryoshka doll trying to stand up, the last four episodes leads into a delicious and satisfying finale. Unfortunately, the 11 original broadcast episodes as well as two special DVD-only episodes aren't enough to cover the story and characters well. Opening and ending music are nicely chosen, the latter accompanied with tons of visuals worthy of being a desktop wallpaper.

Labels: Blast From The Past, Getsumen To Heiki Mina

Getsumen To Heiki Mina is a worthy quick moving anime series. There is really not much character development at all, it seems like any opportunity for it was abandoned.